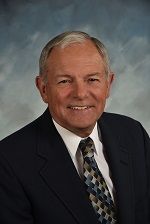 George Brown graduated from the University of New Mexico in 1969, and entered active duty in the United States Marine Corps attending The Basic School at Quantico, VA followed by artillery training at Ft Sill, Oklahoma. Throughout his career as an artillery officer, George served in a variety of command and staff positions at the artillery firing battery, battalion, and regimental levels. He commanded two firing batteries and First Battalion, 11th Marines. His staff assignments include tours with Amphibious Group Two, Headquarters Marine Corps, Joint Staff, and the office of the Assistant Secretary of the Navy for Manpower and Reserve Affairs. After completing 30 years of service, he retired from active duty as the Chief of Staff for Marine Corps Base Quantico, Virginia in July 1999. Upon his retirement, he served the Marine Corps in a different capacity as the Membership and Marketing Director for the Marine Corps Association in Quantico, VA until July 2002, when he and Carolyn relocated to Oceanside, California. In December, 2003 he assumed duties as the Executive Director for the Camp Pendleton Armed Services YMCA. During the 12 years as Executive Director, programs and numbers of military families served saw significant growth at Camp Pendleton. He retired from the Armed Services YMCA in September 2015.